Life As A Mom

So until last week, Quinn used to take rolling over as something fun to do only when he’s bored. It wasn’t a regular thing or anything. This week however he has utterly fallen in love with it and has been practicing it pretty much every chance he gets. Saying that though, still not all the time and he still kinda has to be in the mood for it.

Or that’s what I thought.

And then he rolled off the bed.

And I nearly died.

What happened? I didn’t watch him for 3 seconds and bang!!! And then out came the loudest and saddest cry I had ever heard. I nearly cried too but I knew I had to stay strong so I didn’t have time for that. He cried for about 40secs while I was holding him and then my husband said he was smiling. Smiling?!?! I mean I guess it was good but fucking hell it was still horrible.

Did I feel like the worst mother in the world? Yes! I even left him enough room that when he does (!) roll, nothing would happen. But somehow it still did. So anyway…. after being on the phone to NHS 111 service they said just to watch him for now as it didn’t seem to be anything wrong with him. We also had his weighing that day and as I discovered a little bruise on his ear lobe after my phone call, the health visitor told us to still go to the hospital. So we did. Everything was fine though.

Of course like many other moms out there I never thought I was “that mom” who this can happen to. Ever. But hey, as much as I’ve read other moms comments and stories, apparently this is very common at this age. Not that it makes anything better. I mean I cried later that night again when I was putting him to bed and he was sleeping on me, but I also tried to say to myself to stop blaming myself. Unfortunately these things happen.

I try to do everything perfectly, try to be the perfect mom, that was my first mistake. A mishap. And life goes on. It was a lucky accident and obviously this boy will not have much alone time now!

But just to finish it up, I’m pretty sure it happens to everyone. And who says it doesn’t, I think you lie lol.

This was my favourite comment I saw on my Glow app: 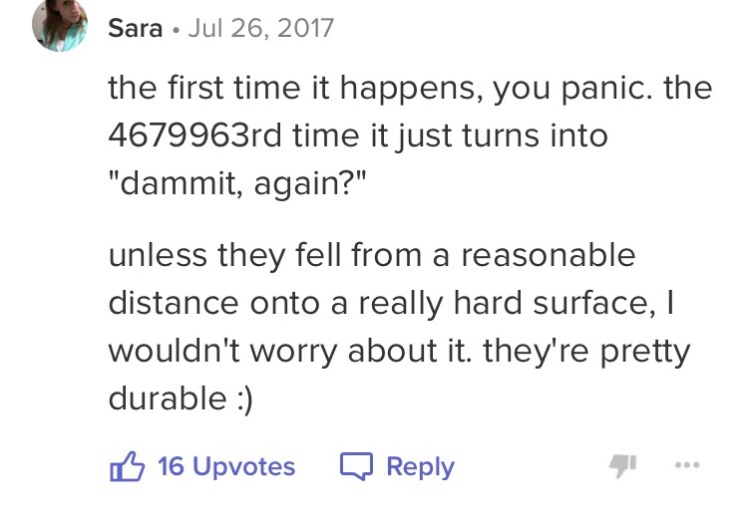 Okay, lots of love and less baby heartache to the world!xx